“As the first Jamaican American Justice on the Florida Supreme Court, Francis is an experienced and solid choice for Florida’s future.”
– – –
“John Couriel is a highly respected lawyer with stellar credentials and a conservative judicial philosophy.” 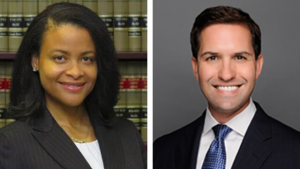 Judge Renatha Francis currently sits as a trial court judge on the 15th Circuit Court in Palm Beach, a position she was appointed to by Governor DeSantis in 2019 and immediately prior to that served as a county court judge in Miami-Dade County.

John Couriel is a highly respected lawyer and a partner at law firm Kobre & Kim LLP based in Miami where he specializes in the U.S. Foreign Corrupt Practices Act, money laundering, extradition and cross-border frauds involving financial products and services.

“Judge Renatha Francis is a woman with an extraordinary life story, solid character and deep faith. She is highly qualified with the unique perspectives of having served as a County Court judge, a Circuit Court judge, and ten years as a judicial law clerk for the First District Court of Appeals in Tallahassee. As a wife, mother and former business owner Judge Francis will bring valuable real life experiences with her to the court. I know her personally and she is also clear on the limited and restrained role of the court and is a “textualist” in the tradition of Clarence Thomas in her interpretation of the Constitution. As the first Jamaican American Justice on the Florida Supreme Court, Francis is an experienced and brilliant choice for Florida’s future.”

“Attorney John Couriel is a highly respected lawyer with stellar credentials and a conservative judicial philosophy. Born in Miami, Florida, Couriel graduated from Harvard magna cum laude and received his J.D. from Harvard Law School. He has served as a law clerk to the Hon. John D. Bates of the U.S. District Court, D.D.C. He also served as an Assistant U.S. Attorney in the Southern District of Florida for five years. Couriel is a member of the Federalist Society and speaks both English and Spanish fluently. Couriel is giving up an extremely lucrative salary to serve on our state’s highest court. When I served on the Judicial Nominating Commission for eight years we were always impressed when we found candidates who were not pursuing judicial positions motivated by an increase in salary. This is not the first time a practicing lawyer who has never served as a judge to be promoted directly to the Florida high court. Several past Florida justices have.”

Renatha Francis’ and John Couriel’s appointments will fill the final vacancy left on the Court after Justices Lagoa and Luck left late last year. However, there is a legal nuance about Francis’ appointment. The Florida Constitution requires a Florida Supreme Court Justice to be a member of the Florida Bar as a lawyer for at least 10 years. Judge Francis’ bar membership began on September 24, 2010, which means that she could not fill the seat until later this year after September 24, 2020. However, both conservative and liberal legal scholars say that she can legally be appointed and not assume the office until September. Of interest, Judge Francis’ appointment was supported by many prominent black lawmakers, including the Florida Conference of Black State Legislators and the Legislative Black Caucus. The Supreme Court has been without either a woman or African-American member since Justice Peggy A. Quince resigned in 2019.

Personal Background and Professional Bio of Renatha Francis:
Judge Renatha Francis was born in Portmore, Jamaica, in 1977. Francis is a past student of St Hugh’s High school and the University of the West Indies, Mona, where she obtained her Bachelor’s degree in law. Afterwards, she migrated to the US, where she received her Juris-Doctor from Florida Coastal School of Law in Jacksonville, Florida in 2010. She primarily represented insurance providers in personal injury protection litigation matters, specializing in the interpretation and application of automobile insurance policies. In 2017, Francis was appointed by Governor Rick Scott to the Miami-Dade County Court. In 2018, she was appointed to the 11th Circuit Court, and in 2019, to the 15th Circuit Court. She lives in South Florida with her husband Philip Fender and their son, Joshua.

Renatha Francis’ interview before the Supreme Court Judicial Nominating Commission can be watched on video from 34:50 to 1:04:40 here: https://thefloridachannel.org/videos/1-11-20-florida-supreme-court-judicial-nominating-commission-part-2/

John Couriel’s interview with the Supreme Court Judicial Nominating Commission can be watched on video from 29:00 to 56:20 here: https://thefloridachannel.org/videos/1-11-20-florida-supreme-court-judicial-nominating-commission-part-1/